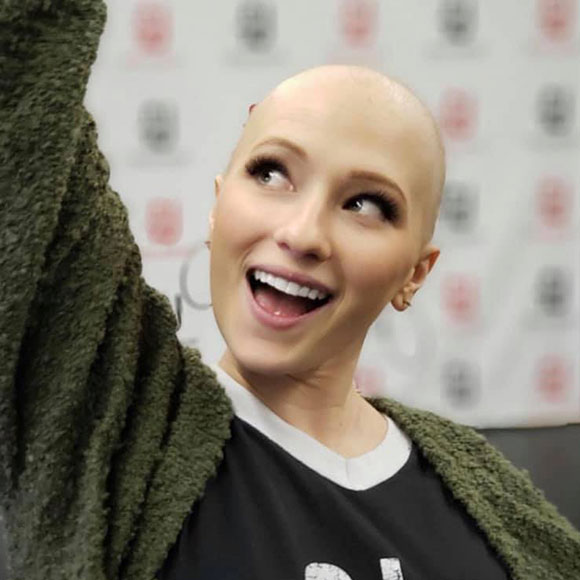 “The staff always made me feel welcome. My doctor and nurses always answered the many questions I had. All the staff were great from the moment you walked in the door to the moment you left. They were always so helpful and nice, keeping you updated on everything.”

Allie Brown, 23, was diagnosed with Hodgkin’s Lymphoma while attending college at Georgia Southern. Due to the side effects of treatment, her college classes came to a pause. She received treatment at Cancer Center of Middle Georgia, which consisted of four cycles of chemotherapy with routine blood work.

Allie says about her care at the Cancer Center of Middle Georgia “The office staff always made me feel welcome. I always had so many questions, concerns, wondering about the future, and I came in every two weeks with lots of them! Dr. Vyas always answered my questions and concerns in medical terms but in a way I could understand. I never felt rushed during my appointment. I always left the office feeling like a weight had been lifted.

“My nurses always answered the many questions I had during my infusions. All the staff were great from the moment you walked in the door to the moment you left. They were always so helpful and nice, keeping you updated on everything.”

Allie continued to work while receiving treatment at Cancer Center of Middle Georgia as a hip hop dance teacher/choreographer at Fancy Dancer in Dublin, GA. In an article in her local newspaper called “The Strength of a Dancer”, Allie stated that she loved going to work. She also mentioned how work helped pass the time and give her sense of purpose while going through treatment. Allie also said that since her diagnosis, Allie has been surrounded by an extensive support network. Her doctor, coworkers, and her boss at Fancy Dancer regularly call and text her to see how she’s doing. However, Allie knew that not everyone received the same support she did during her cancer journey.

Allie has goals of starting a foundation called Angel Haven, named after her baby sister who passed away. Her ultimate goal is to bring positivity and encouragement to patients who do not have a strong support system in place like she did. Allie stated in her newspaper interview, “I was lucky enough to have my family, my friends, my coworkers, and my boss, but there’s people that don’t have anyone, and they’re having to go through it by themselves. So, I want to be there.”

We recently asked Allie for an update on her progress in starting the foundation. She said it was definitely still in the works, but it’s definitely going to happen.” She explained that while she was receiving treatment in Augusta she experienced a day at a women’s house where they did her hair and make-up. Allie says she thinks that it would be cool for men to have their own house as well to relax and get away from treatment. She plans to accommodate and provide support for both males and females going through treatment within her foundation.

Allie says the best part of the Cancer Center of Middle Georgia is, “Everyone knows you by your name and I think that’s really cool, makes it really personal.”

Allie is graduating soon with a Bachelor’s Degree in Marketing. She says her plans after college are to continue working at the dance studio at night and hopes to work in marketing.

Any cookies that may not be particularly necessary for the website to function and is used specifically to collect user personal data via analytics, ads, other embedded contents are termed as non-necessary cookies. It is mandatory to procure user consent prior to running these cookies on your website.

We are taking significant efforts to safeguard the health and safety of our patients and staff during the COVID-19 pandemic.